I know I say it in most of my posts but this is another one of my favourite free sock knitting patterns from Ravelry. What would I do without Ravelry I might add! The pattern is called Maidenhair Fern socks and I am enamoured with these socks.

The pattern detail is exquisite and not difficult to knit either. It’s a 16 row repeat pattern. I did make a few variations along the way. To start with I used 5 dpns rather than 4 dpns….only because that was how I was initially taught to knit socks and I find it easier to use 5 dpns. When I cast on there were 18 sts on each needle. As a tip, for the round where you had to increase 3 stitches evenly across (making a total of 75 stitches), I k23, kfb repeat 3 times. I then redistributed the stitches as follows: N1 – 30 sts; N2 – 15 sts; N3 – 15 sts; N4 – 15 sts.

After shaping the heel and picking up the stitches from both sides of the heel flap, I progressed to using 6 dpns!! What! you’re wondering….but I found it easier to use the 6 dpns. My stitches were distributed as follows: N1 – 31 sts; N2 – 15 sts; N3 – 15 sts; N4 – 15 sts; N5 – 31 sts. Needles 2, 3 and 4 were the pattern repeat stitches and because the pattern consisted of 15 stitches it was just easier for me to have one pattern repeat on each needle. It was a bit fiddly but worked for me.

Once the foot section was finished and I was ready to start the toe, I was required to knit one row decreasing 9 sts evenly across Needle 2 (which was my Needles 2, 3 and 4) so I k3, k2tog x 9 times.

I changed the toe decreases section to suit the type of toe finish I like best. First round was the same, followed by Round 2 knit, Round 3 as per Round 1, Round 4 knit and so on until there was a total of 20 sts (5 sts on each needle). Divided the 20 sts between two needles (10 sts on each needle) and then grafted the sts together (Kitchener stitch).

Look at the lovely detail of the maidenhair fern pattern. 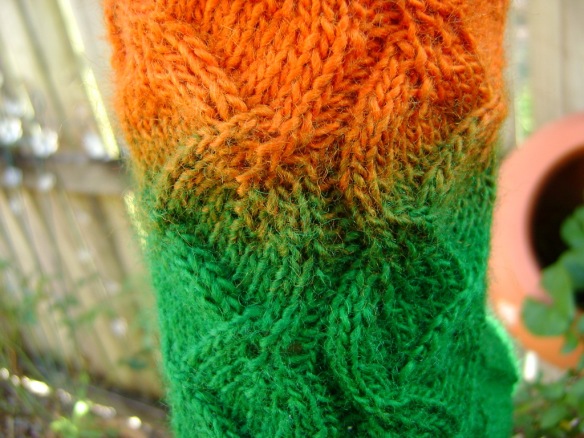 I’m also very happy with the yarn choice I made. This is Schoppel-Wolle  Zauberball Orange and what I really like about it is that it’s not a solid colour but two colours that complement each other and yet there is enough colour in each section to really show off the sock pattern to all its glory. What do you think? 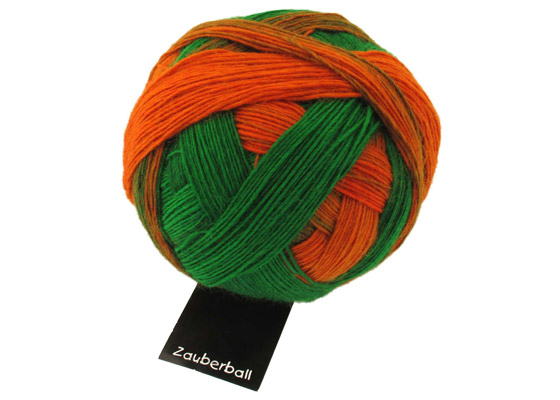 That’s it for now. I’m going to enjoy my lovely air conditioning as it’s another stinking hot day in Brisbane today. You’d melt if you were outside!