My usual weekend post is a bit late this week as I’ve just spent a fantastic weekend knitting at a scrapping retreat! My friend Helen who’s an avid scrapbooker asked me if I’d be interested in the weekend retreat and I could bring my knitting along. Wow what an opportunity….nearly three days of knitting….who could say no to that.

The venue we stayed at was Stacey’s at the Gap which is nestled adjacent to the Main Range National Park at Cunningham’s Gap in south east Queensland.

The cabins all had different configurations and were all named after nearby towns and cities: Boonah, Ipswich, Brisbane, Stanthorpe, Warwick.

I spotted a beautiful mulberry tree….

And this beautiful mauve plant. I have no idea what it is… 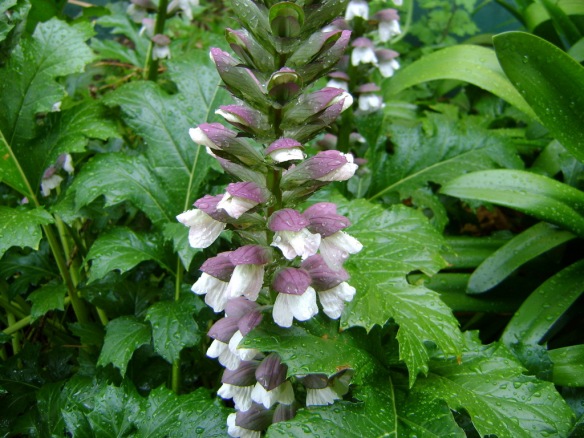 And this tree which had stunning gold flowers…

The views were amazing…

Now to the scrapbooking. I cannot believe how much ‘stuff’ scrapbookers use!!!

Some scrapbookers even brought along mobile drawer units!!

I soon understood why we were met by the hosts who had a large trolley. I brought along four knitting projects and a crochet project which fitted neatly in two small bags.

I made two dishcloths. This one is Gramma’s Dishcloth and I used Lily Sugar ‘n Cream which is a 10ply 100% cotton. Both patterns are available free on Ravelry. 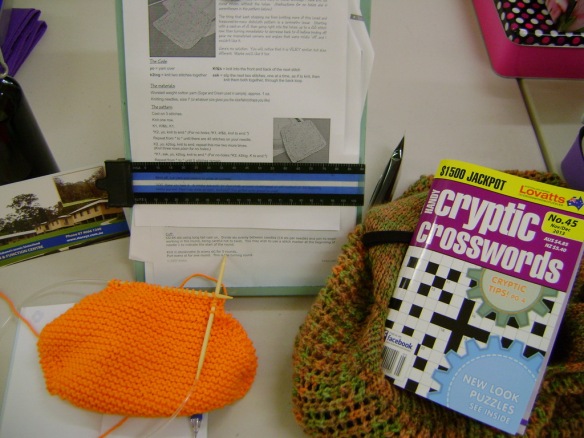 And this one is the Knitted Flower Cloth. I managed to get both cloths made from the one ball of cotton.

This is my third Samothrace Wings Scarf and I’m making it in Zen Yarn Garden’s Serenity Silk + which is a 75% superwash merino / 15% cashmere / 10% silk (lace 2ply). I’ll tell you more about it once I’ve completed the scarf. 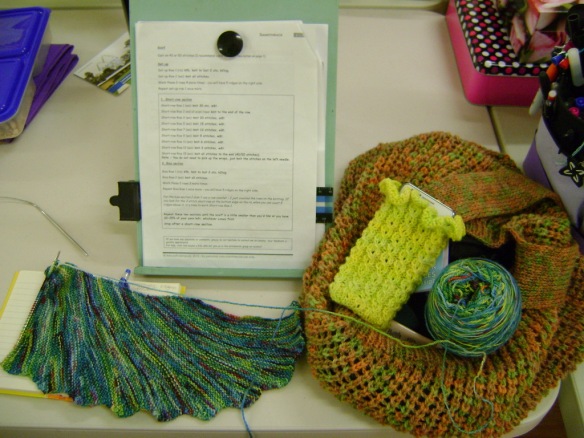 I also took along my Leafy Bias Scarf which I’ll show you when I’m finished. It’s certainly coming along a treat except for two rows where I must have been too busy talking and messed up the leaf pattern so I will have to frog a few rows to fix it up. I was going to leave it but it just keeps niggling at me so I’ve relented!

I’ve also started another Starburst Flower Crochet Blanket in three colours: cream, olive green and pale green. It’s a long project as I only do a little bit every now and then so it’s great to take along to fill in time.

A few of the scrappers asked whether I’d been ‘converted’ to scrapping and I had to say ‘no’. I’m too much into wool, knitting, spinning and crocheting. And scrapping involves much too much ‘stuff’ for me and some of it is quite heavy too.

I’ll just stick to my lightweight knitting which is just so portable!

I certainly had a great weekend learning about another craft and meeting lots of new people and enjoying the beautiful and tranquil surrounds of this part of south east Queensland that I hadn’t visited before. It was so much cooler here in the mountains which I really loved the most.

8 thoughts on “Knitting at a Scrapbooking Retreat!”