While I was sorting out my hundreds of patterns last week I came across this cute little mobile phone sock pattern so I whipped out some 8ply wool and my 4mm circular needles and quickly knitted it up.

The pattern used Judy Becker’s Magic Cast On but as I haven’t done that before and I didn’t feel like sitting at my computer and watching an instructional video, I simply stitched the bottom of the sock with the cast on tail once I’d finished. You’d hardly know the difference.

As you can see I am quite partial to the mock cable stitch as it’s so easy and looks so effective. 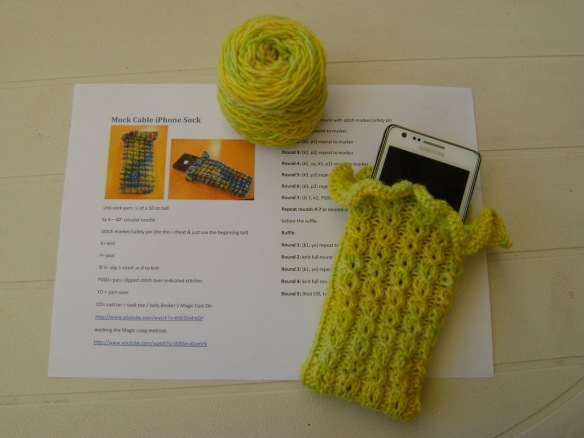 I bought this yarn from Threads and More in Brisbane. I believe it’s Naturally Natural Wool that has been hand dyed by the staff of the shop using Kool Aid.

Yesterday as I arrived at my Knit and Knatter gathering at The Artist Tree I noticed there were some decorations and posters on walls and it looked like something had happened or was about to happen. Apparently Channel 9 had rung the owners of The Artist Tree that morning to let them know that Angelina Jolie would be dropping in as part of the search for locations for the filming of her latest movie Unbroken. Unfortunately the visit was cancelled at the last moment as they were held up at other locations.

Redland City area is in a tizz at the moment since this story appeared in last Friday’s Redland Times about Angelina filming part of her movie in the Redlands. This is the second major movie to be filmed here. In 2009 The Voyage of the Dawn Treader (Narnia Chronicles) was filmed at Cleveland Point which is so close to my home; in fact it’s on my walking route.

So it looks like the Redlands is the ‘in’ place at the moment!

At my previous Knit and Knatter get together I was given a huge cone of wool that had been donated to the craft area of The Artist Tree. It looked like it may have been a ‘rejected’ cone as there were a few rips across the top of it. I took it home and laboriously wound it into balls of wool.

It’s quite coarse wool so I have kept some of it to knit string bags. There was approximately 6kg of wool in total. Vicki from The Artist Tree was very happy when I gave her three bags of wound wool. At least now it can be used in their craft area. Even though there were quite a few small balls caused by the rips in the cone, I did manage to wind heaps of large balls as well. This picture only shows a very small amount of the wound wool. 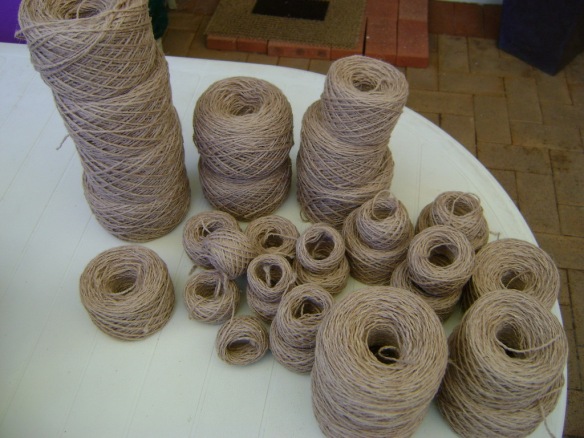 One of my work mates keeps chooks (chickens) and at the moment they’re having an egg laying frenzy so I bought a dozen eggs from him. Notice anything odd about one of them?

Yes, that’s right, it looks like one of them is a double yolker. There’s nothing like freshly laid eggs.

I’ve saved the best for last. On Thursday as I was walking to work there happened to be a charity stall in the main shopping area so of course I had to stop and have a quick look as they were selling knitted items. My eyes instantly zeroed in onto this beautifully crocheted afghan. 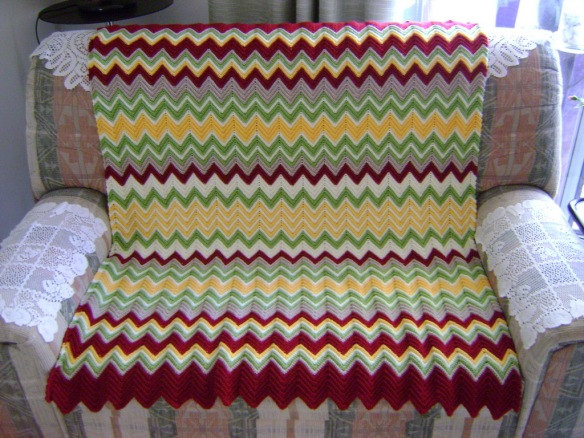 Isn’t it simply stunning and isn’t it a perfect fit for my two seater couch?

I was told it had been crocheted by an 88 year old woman; it took her half an hour to complete each row and it cost her $36 in yarn. She was only going to sell it for $40 but her friends talked her into selling it for $50 which I happily paid as it is so lovely and I have a fair idea how many hours went into crocheting it. 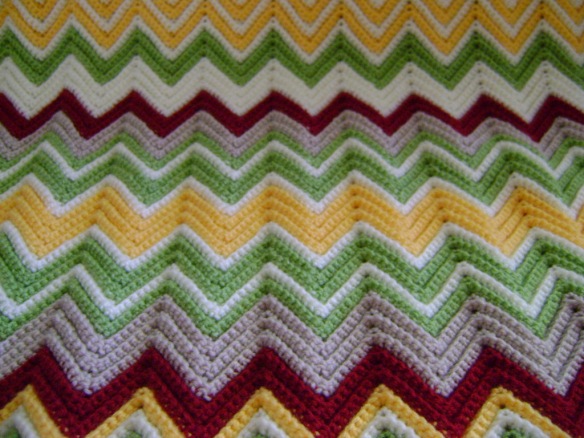 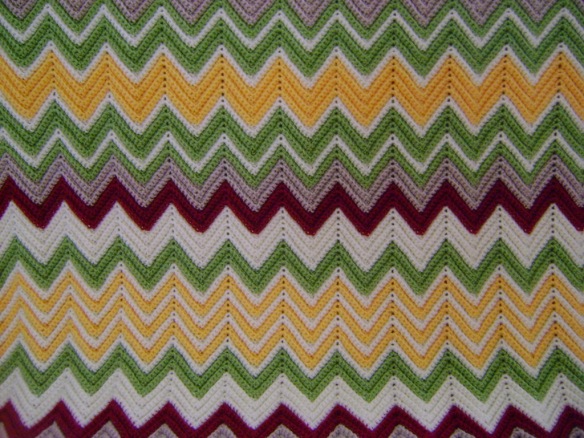 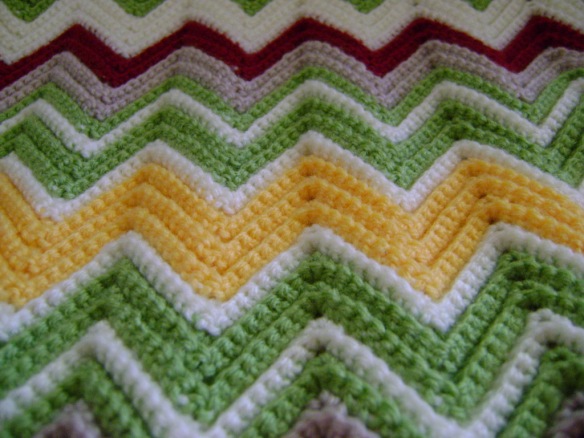 It’s actually inspired me to maybe crochet one myself one day. I have quite a bit of Cascade 220 Superwash and it would be ideal. One last photo of a gorgeous afghan… 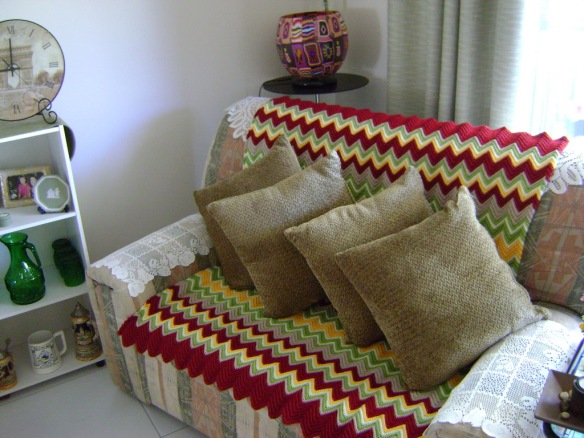 That’s my main news for this weekend. Until next time…

Hi, my name is Melanie and I love knitting, spinning, weaving, crocheting, constantly increasing my stash, reading, cryptic crosswords, playing scrabble with my dear friends and eating chocolate. I live in the eastern suburbs of Brisbane in sunny Queensland, Australia. I am the proud owner of seven beautiful spinning wheels – Crofter, Brian Vincent Nancy, Roy McKnight Brief (Suitcase) Wheel, a Roy McKnight upright wheel,  Sickinger Kitty, Sleeping Beauty Thumbelina, and a Camelot. I have an uncontrollable stash that seems to grow by the day now that I have added wool tops and rovings into the equation! I have also started weaving and own a Schacht Inkle Loom, an Ashford Inklette Loom and four Ashford Knitters Looms: 20cm SampleIt, 30cm, 50cm and 70cm :-)

the joy of creativity

The Charm of It

Notes from a quiet, curious life

A Life Of Intertwining Threads.